Some, But Not All, Snowmobile Trails Are Now Open 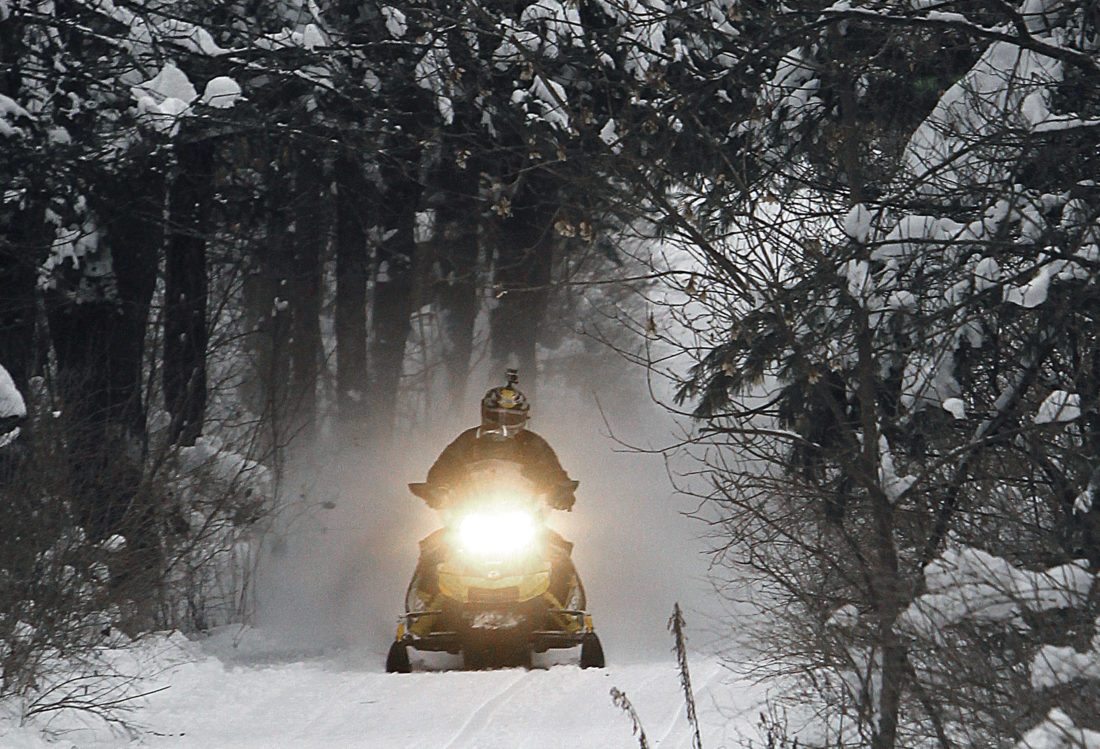 The Chautauqua Lake Snowmobile Club announced this week that four of its snow groomers are currently down, but that the majority of the county’s snowmobile trails are now open for snowmobiles. AP file photo
After a month of weird weather ranging from unseasonably warm temperatures to above average snowfall, Chautauqua County’s snowmobile trails are now open only a week behind schedule.
The Chautauqua Lake Snowmobile Club announced this week that the trails were open as of Thursday, just eight days after the originally planned opening date at the beginning of snowmobile season on Dec. 20. The delays came first in the form of a lack of snow and exceedingly muddy trails, but consecutive weeks of harsh and heavy snowfall transformed the trails into a snowscape requiring many man hours and equipment to clear.
“CLSC trails will be open (today), but ride with caution,” the club announced in a statement. “Snow is deep and wet underneath. It may also be hiding branches or fallen trees. Snow banks at road crossings are a major safety concern, some nearing 6 feet high. We are trying to open them up. Some signs may be hidden in the snow. There are still a few gates we are trying to get open. Please stay on the trails. Our landowners have been more than generous.”
The announcement added that the trail to Busti is still closed, and four of its 10 groomers are currently down, making for difficulty in getting all the trails as navigable as they could be.
“Grooming will be limited and some trails have not been checked, so ride safe and with a partner,” the announcement concluded.
The county offers over 450 miles of snowmobile trails, which take riders across rolling foothills, open meadows and forestlands.
These trail systems are the result of a strong collaboration among Chautauqua County’s five snowmobile clubs: Chautauqua Lake Snowmobile Club, Cherry Creek Sno-Goers, Ellery Sno-Cruisers, Lake Effect Trailbreakers and Sunset Drifters; and hundreds of landowners, volunteers and other key stakeholders.
Snowmobile registration can be done at any of the County’s three Department of Motor Vehicles (DMV) offices and registration is $45 for snowmobile club members and $100 for non-members. DMV offices are open from 8:30 a.m. to 4:15 p.m. Monday through Friday and each office has one day a week where they are open until 5:45 p.m.
The Dunkirk office is open late on Mondays, the Mayville office is open late on Wednesdays and the Jamestown office is open late on Thursdays.
To learn more about the county’s snowmobile clubs, and to keep updated on trail conditions, visit chautauquasnow.com, cherrycreeksnogoers.com, ellerysno-cruisers.org, trailbreakers.com and sunsetdrifters.net.

For More Information On Chautauqua Lake Real Estate and Living Visit: www.chautauqualakehomes.com
Posted by rickandjuliarealtors at Friday, December 29, 2017 No comments: Links to this post

Chautauqua Lake Funding A Small Step In The Right Direction

More than $6 million in improvements are on their way to Chautauqua Lake.
The money can’t come soon enough.
Last summer likely won’t be remembered as a good one for Chautauqua Lake. Blue-green algae blooms popped up for much of the summer and fall. Weeds and vegetation have been a recurring problem for nearly two decades, with last year no exception to the rule. There is no single fix to the lake’s algae and weed problems, but improving septic and sewer systems around the lake is one of the best ways to remove phosphorus and other nutrients that are part of the cocktail that create blue-green algae from the lake.
It has been estimated that completing a new sewer system around Chautauqua Lake will cost about $81 million. There is obviously not that much money in Chautauqua County’s collective couch cushions to pay for that, nor is there an ability to take out loans for that big a cost. Roughly a year ago, Rolland Kidder, a Stow resident and former state Assemblyman, wrote an op-ed to The Post-Journal detailing the difficulties over the years getting state support for sewer and water projects because they lack the “sizzle” of bigger projects. The cost and lack of sizzle have left some wondering if completing a sewer around Chautauqua Lake is a pipe dream.
The state’s investment of $5 million for a sewer extension in North Harmony and $1 million to help the Chautauqua Heights Sewer District Wastewater Treatment Plant project is only about 7.5 percent of the total cost of sewering Chautauqua Lake. More importantly, the size of the grants are a sign from the state that they realize the importance of Chautauqua Lake environmentally and economically to Chautauqua County.
The five townships that surround Chautauqua Lake constitute 40 percent of the property value of the county with a total assessment of $2.7 billion. Protecting that asset is just as important as shiny new buildings. And it is good to see the state come to the realization that a healthy Chautauqua Lake will bring more tourists to Chautauqua County than any new building.


For More Information On Chautauqua Lake Real Estate and Living Visit: www.chautauqualakehomes.com
Posted by rickandjuliarealtors at Thursday, December 21, 2017 No comments: Links to this post

CHERRY CREEK, New York - Western New York's Cockaigne ski resort, closed since 2011 when a fire destroyed its main lodge, will reopen next year with new owners.
A popular winter destination for Northeast Ohio skiers, Cockaigne was known for its laid-back, family-friendly atmosphere and abundant natural snow. It sits on several hundred acres in Chautauqua County, New York, about 20 miles south of Lake Erie and 150 miles east of Cleveland.
The resort has been for sale for six years, since shortly after a fire in January 2011 destroyed the resort's iconic lodge, which was built as the Austrian Pavilion for the World's Fair in New York City in 1964.
Long-time owner Jack Van Scoter, 82 at the time, didn't have insurance on the property and said he was too old to rebuild.
Enter Adam Pirtz and Isaac Gratto, who met years ago while working together at nearby Peek'n Peak resort. They had talked for years about buying Cockaigne.
The sale was official this week and work on the $3.5 million renovation project begins immediately.
Related: Where to ski near Cleveland: A snow lover's guide to 12 winter resorts in Ohio, surrounding states
The first order of business is to rebuild the lodge. Plans call for a 20,000-square-foot facility, which will house ticket sales, a rental facility, food service, restrooms and more. Pirtz said work on the building will begin as soon as possible, and should be completed by summer 2018.
The new owners plan to make Cockaigne a year-round destination, with concerts, festivals and other family-friendly activities during the warmer months and skiing, along a new snow tubing course, during the winter.
Much of the resort's old equipment and infrastructure will be replaced, including rental skis and snowboards, grooming and snow-making machines, lighting, parking areas and more.
But Pirtz said some of the existing equipment still works, including four lifts -- three two-person chairlifts and a J-bar. The park will add two new conveyor belt lifts to the beginner area and tubing park.
When it closed, Cockaigne had 14 slopes. The new owners plan to add two more, for a total of 16 next winter.
Gratto said the resort will keep the trails' sweet-treat names: Cracker Jack, Marzipan, Kandy Kaigne and Peppermint Twist, among others.
Interestingly, neither Pirtz, a native of Cortland, Ohio, nor Gratto, who grew up in western New York, has ever skied at Cockaigne. Both grew up skiing at nearby Peek'n Peak.
Pirtz said the community reaction to the resort's reopening has been overwhelming.
"It's been unbelievable. The feedback and the support is more than we could have anticipated," he said. "It's everywhere - locally, from groups in Ohio, ski shops. It's unreal."


For More Information On Chautauqua Lake Real Estate and Living Visit: www.chautauqualakehomes.com
Posted by rickandjuliarealtors at Thursday, December 07, 2017 No comments: Links to this post