Justin Moore
6:13 PM, Jun 21, 2017
wkbw | new york | chautauqua | southern tier | chautauqua institution
CHAUTAUQUA COUNTY, N.Y.(WKBW) - Crews are putting the final touches on the new $45-million dollars amphitheater at Chautauqua Institution.
On Tuesday inspectors gave the amphitheater a temporary certificate of occupancy. The entertainment venue is set to hold its season opening event on Saturday with comedian and former host of "The Tonight Show" Jay Leno. The Queen of Soul, Aretha Franklin was suppose to perform, but canceled due to health reasons.

The venue didn't come without a fight. People fought hard to keep the former amphitheater with decades of rich history.
"We were upset about losing it as well. But we realized the long term longevity of Chautauqua Institution depended heavily on this facility, because this is the heart and soul of our institution," John Shedd the Chautauqua Institution Director of Operations said.
Shedd said the goal was to make the more than 4,000 seat venue look and feel just like the old one. They're reusing windows and even the organ chamber kept from the old facility. The amphitheater is even painted the same color as the old one.
A lot of changes back stage as well. The three story house that is connected to the stage has new dressing rooms with a view of Chautauqua Lake, a kitchen, and multi-purpose space for more events.
Although Jay Leno will be the first performer on the new stage, Jamestown High School seniors will be the first to walk across the stage for their graduation on Thursday, June 22nd.
For a complete list of educational and entertainment events at Chautauqua Institution visit http://chq.org/season


For More Information On Chautauqua Lake Real Estate and Living Visit: www.chautauqualakehomes.com
Posted by rickandjuliarealtors at Wednesday, June 21, 2017 No comments: Links to this post

Since its 2014 inception, the Chautauqua Lake & Watershed Alliance is continuing its mission to secure funding and allocate resources for water quality improvement projects.
Within the last two years, $385,000 in local funds were secured to bring $1.6 million in state grant funding. Currently, nine projects are underway with the Alliance serving as the primary facilitator and working with six of the nine municipalities bordering the lake.
“There were a lot of expectations when the Alliance was formed, and I think we’ve met them,” said Erin Brickley, executive director for the Alliance. “It took time to get up and running. With the existence of the Alliance, there’s nothing but potential.”
The Alliance evolved from the Chautauqua Lake Management Commission, an advisory committee formed by the County Legislature in 2005. Through the Alliance, framework was established with goals to secure funding from various sources to implement projects in and around the lake. The Alliance’s staff includes Brickley and Randall Perry, project manager, who facilitates the grants and projects.
The nine municipalities that border Chautauqua Lake along with 22 local organizations are Alliance members. Each member has donated funding used for purposes to supply the required local matches to receive the grants.
Brickley said it took a few years to get buy-in from municipalities and groups. With that part complete, Brickley said relationships are being built and projects are moving.
“It’s been a great process,” she said. “Each municipality and group are focused on things and we know they’re stretched (on funds). That’s where we come in and write grants to bring in state funding to leverage what we have.”
After becoming fully operational in 2015, the Alliance worked successfully to secure six state grant awards to address streambank and channel instability on various creeks. Together, the projects are estimated at $1.43 million. Of that total, $1.07 million in grants were secured.
A stabilization project on Prendergast Creek was completed in the fall. Work to stabilize sections of Bemus, Goose, Ball, Dutch Hollow and West Dutch Hollow creeks are expected to begin this year and in 2018.
Brickley said she’s particularly excited about the Alliance’s work with the town of Busti and village of Lakewood to secure funding for a study on stormwater infrastructure. The study will act as a guideline for projects to mitigate potential flooding and nutrients from entering the lake. The study will cost $136,500. The state is supplying $100,000.
With success seen for Lakewood and Busti, the Alliance is beginning to work with officials in Mayville and Chautauqua to get a similar study going. A study in the Jamestown area is a future target.
The Alliance has also worked successfully with the village of Celoron for waterfront improvements, which include installation of a heavy limestone rip-rap, a new boardwalk and a handicap-accessible kayak and canoe launch. The Alliance is also working with the Chautauqua Lake Association, Audubon Community Nature Center and Roger Tory Peterson Institute to strengthen invasive species control, particularly on early detection. Funding was secured though state Sen. Cathy Young, R-Olean.
“There’s no silver bullet to solve Chautauqua Lake’s issues. Multiple disciplines need to be addressed,” Brickley said. “It’s about education and helping to fill a gap in funding to assist with projects.”
Brickley said pulling together stakeholders was a huge lift. As for the Alliance’s outlook, she said she “sees nothing but more growth.”


For More Information On Chautauqua Lake Real Estate and Living Visit: www.chautauqualakehomes.com
Posted by rickandjuliarealtors at Wednesday, June 21, 2017 No comments: Links to this post

With clear skies and warm temperatures, boaters and lake users are beginning to enjoy days out on Chautauqua Lake.
Among those on the water are Chautauqua Lake Association crews who are working on several fronts to clean up the lake. Doug Conroe, executive director for the CLA, said they started harvesting the first growth of weeds near the outlet so boats can move up the center navigational channel. In addition, Conroe said they’ve taken 40 truck loads of debris out of the water.
“Things are starting to move right along,” Conroe said. “We’ve been all around the lake and up major tributaries to get debris. We’ve covered the whole shoreline and open waters of the lake.”
So far, Conroe said the lake’s water quality is looking good. The lake’s seeing weed growth that’s coming on strong, but he said there’s no issue as it takes care of itself. Conroe said they’ll focus on the second growth, which usually occurs during the main recreational season.
“People shouldn’t be alarmed about the growth. It happens every year,” Conroe said. “It solves itself and goes away on its own. That’s why we don’t spend a lot of our limited funding dealing with it.”
One the key factors playing into the lake’s water quality is weather. Conroe said it’s a little early to know what will happen. He said they will get a better sense once the weather gets warmer.
“I’ve had communication with the laboratory in Syracuse about our water samples we collected (last week),” he said. “I was talking to the Department of Environmental of Conservation about it. We’re focusing on it and collaborating with everybody to make sure that we all know where we’re at and what’s happening.”
Conroe said the CLA will have crews at the north, south and middle sections of the lake during the season. The full crew will come on June 19, he said.
The CLA will again conduct a boat stewardship program at Chautauqua Lake as well as Lake Erie and Bear Lake. Watercraft stewards will be positioned at boat launches to talk to boaters about invasive species prevention. Conroe said they have most people hired, but they’re looking for more individuals to bring on.

For More Information On Chautauqua Lake Real Estate and Living Visit: www.chautauqualakehomes.com
Posted by rickandjuliarealtors at Monday, June 05, 2017 No comments: Links to this post 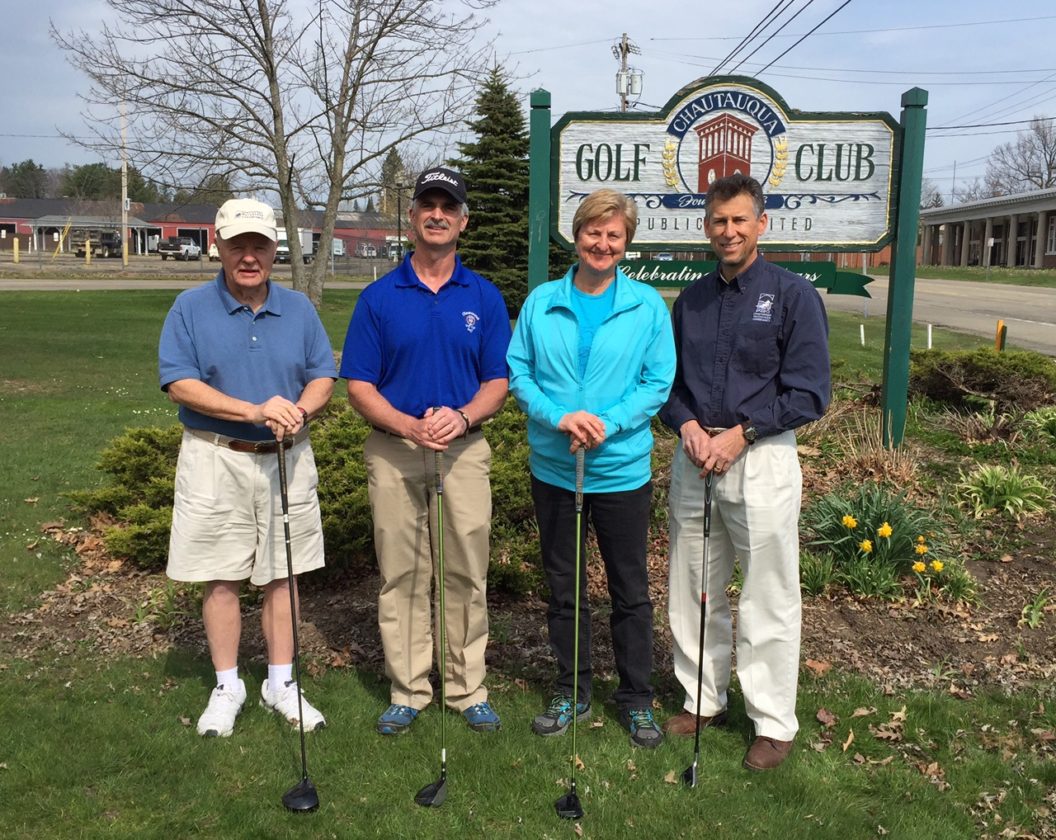 The Chautauqua Watershed Conservancy will be the beneficiary of the Chautauqua Golf Club’s 31st annual PGA Pro-Am Golf Tournament. Pictured from left are event chairman Bill Locke, PGA professional Troy Moss, Dr. Jeanne Wiebenga, Chautauqua Watershed Conservancy board member, and John Jablonski III, Chautauqua Watershed Conservancy executive director. Photo by Don Kimmel
CHAUTAUQUA — The Chautauqua Golf Club will hold its 31st annual Pro-Am Charity Golf Tournament on Monday, June 26.
The event will have an 11 a.m. shotgun start and a two best ball format. All proceeds will benefit the Chautauqua Watershed Conservancy and its efforts to improve the health and vitality of Chautauqua Lake and the surrounding watershed.
The “Score One for the Lake!” tournament welcomes both male and female amateurs playing Chautauqua Golf Club’s Lake Course. Each foursome will include a visiting PGA professional from the Western New York and Northwestern Pennsylvania areas. Lunch will be served on the course, and the event will conclude with an awards dinner at the club’s Double Eagle banquet facility. Various opportunities to sponsor the event are available and may be tax-deductible.
The event serves as a major fundraiser for the conservancy, with proceeds from prior year tournaments supporting vital pollution prevention, watershed education and land conservation projects and programs. The conservation of wetlands at Whitney Bay and Whitney Point and facilitating lakeshore buffers and stream erosion control projects are examples of recent projects assisted by this tournament.
“The CWC Pro-Am tournament funds activities which address the root causes of the pollution that fuels plant and algae growth in our lake,” said Bill Locke, pro-am chairman. “These activities include watershed conservation projects and conserving the important habitats that provide clean water to the streams and lakes of our Chautauqua region. The Conservancy works with landowners to enhance shoreline habitats, control soil erosion, re-establish healthy vegetated buffer strips along streams and reduce nutrients entering our waterways from lawn care and other related activities. Stopping these problems at their source is essential to a healthy lake. Maintaining a healthy, enjoyable lake is essential to our economy and benefits all area businesses and residents.”
More information is available at the conservancy’s website at www.chautauquawater-shed.org or by calling the conservancy at 664-2166 or the Chautauqua Golf Club at 357-6211.

For More Information On Chautauqua Lake Real Estate and Living Visit: www.chautauqualakehomes.com
Posted by rickandjuliarealtors at Thursday, June 01, 2017 No comments: Links to this post