Looking for Lake Sales Experience call us were happy to help.


Our Listings: www.chautauqualakehomes.postlets.com
Posted by rickandjuliarealtors at Wednesday, February 26, 2014 No comments: Links to this post 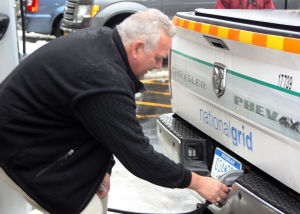 Al Wager of National Grid plugs an electric-powered truck into a new charging station in the rear parking lot of the Inn at Holiday Valley. The station is the second in Cattaraugus County.

Posted: Friday, February 21, 2014 11:31 am | Updated: 11:34 am, Fri Feb 21, 2014.
Holiday Valley unveils electric vehicle charging station By Rich Place, Managing Editor The Salamanca Press | 0 comments
ELLICOTTVILLE — Visitors to Holiday Valley who arrived in an electric vehicle can now charge their vehicles for free at a new charging station at the resort. The charging station, located behind the Inn at Holiday Valley and includes two ports, was installed as part of a partnership with National Grid, the New York State Energy Research and Development Authority (NYSERDA) and ChargePoint. The station is one of more than 15 charging stations in Western New York and the second in Cattaraugus County, according to Al Wager, manager of community and customer management for National Grid. The other county station is at the Olean Center Mall.
During a brief demonstration Friday, Wager noted Holiday Valley is a perfect location for a charging station; a full charge takes approximately 7 to 8 hours and can be done while the travelers are enjoying the resort.
“Plug-in electric vehicles are more than just a new way to get around,” Wager said. “They’re a major part of a cleaner, more efficient transportation future. We’re committed to making this new technology more viable and cost-effective for ourselves and our customers.”
Wager noted the average fuel cost of transportation with an electric vehicle is 3 cents or less per mile, compared to about 15 cents per mile for a gas-powered vehicle. And at Holiday Valley, the vehicles are charged free.
“Holiday Valley not only hosts this particular location but also pays for the electricity consumed at this station,” he said. “We particularly want to thank our partners in this broad effort — NYSERDA and ChargePoint — as well as our host partners, including Holiday Valley.”
Jane Eshbaugh, marketing director at Holiday Valley, said she is excited to have the charging station at the resort for its customers.
“It’s a look into the future,” she said. She added that as a business dependant on weather, Holiday Valley sees this as a “good first step” in doing something proactive to care for the environment.
ChargePoint, the power station’s manufacturer, operates stations in more than 14 countries. Its website and smartphone apps allow users to find a power station and see if it’s being occupied.
The power station’s installation is part of a $1 million public/private partnership between ChargePoint and NYSERDA. Early in 2013, Governor Andrew Cuomo announced the Charge NY program, which among other goals calls for investment in 3,000 public and workplace charging stations by 2018.
(This story appears in the Feb. 27, 2014 edition of The Salamanca Press.)

For the past three years, the centerpiece of the Mayville winter festival has been absent due to mild temps, but this month's frigid weather meant perfect conditions for building the giant ice castle.


MAYVILLE, N.Y. - In recent years, the weather has not been kind to volunteers building a giant ice castle in Mayville.
"Last year we just had a snow pile that we built into a slide. The year before that we had no winter at all, no ice to build with. The year before that we built a castle, but had to take it down due to safety concerns the Friday before the lighting. We had 60 degree weather and it melted out castle," said David Douglas, this year's head of construction.
There are no worries this year. Prolonged frigid temps means a frozen Chautauqua Lake and therefore plenty of building material: giant ice blocks harvested from the lake using chain saws and a primitive pulley system.
This year's ice castle is made up of 1200 blocks which weigh between 300 and 400 pounds each. Volunteers use a mix of snow and water to make an icy "mortar" to hold everything together. They put in 2,000 hours to build the castle.
The ice castle will serve as the centerpiece of the President's Day weekend Winter Festival at Lakeside Park.
The festivities kick off Friday night with the castle lighting ceremony. There will be music, food, and plenty of winter activities through the weekend.
Click here for more festival information.

In Mayville, the cold weather has been a boon to crafting a castle out of ice blocks carved from a frozen Chautauqua Lake.

MAYVILLE – If there was ever a winter to build an ice castle, this is it.
The ice-cold temperatures have been ideal for the 12-foot-high, 90-foot-wide fortress that since last Friday has been rising from the banks along Chautauqua Lake.
“The biggest challenge is the weather, and this year, it’s cooperated,” said David Douglas, a village resident and the castle’s designer for the annual ICE festival, which takes place Feb. 14 to Feb. 16.
“Three years ago, we had a beautiful castle, 60 degrees, and warm wind and rain, and we had to knock it down on the Friday of the festival because it was unsafe,” he said.
No one’s expecting that to happen this year. Thursday, with a day to go to finish building the castle’s frame – and another week to add decorative elements and lighting – about a dozen volunteers working in 10-degree weather were busy moving blocks of ice from the lake to the ground. That’s where a crane on one side and an excavator working on the other lifted them with cables attached to tongs made by Chautauqua Iron Works.
Some of the work was done the old-fashioned way – the way blocks of ice used to be taken and put into storage – with the added benefit of electricity, diesel and heavy machinery.
About 150 blocks of ice – averaging 40 inches by 20 inches, and weighing 300 to 400 pounds each – were cut from the frozen lake with a chain saw mounted on a sled, about 200 feet from the bank that serves in warmer weather as a boat launch. Volunteers used ice hooks to push the blocks onto a winch-activated trough. From there, the blocks were unloaded and slid along the ice and snow about 20 feet to put them within the crane’s reach.
“They used to do all of it by hand before there was motorized equipment,” said Burl Swanson, a self-described “iceberg herder.”
Some 1,000 blocks of ice were expected to be in place by the end of the day, with another 500 more to be cut and hoisted. The Chautauqua Belle, a replica of the original steam ships on Chautauqua Lake, rested a stone’s throw away from the castle.
Douglas said he thought ice castles were cool ever since he first volunteered in 1987, the festival’s first year. He’s proud that this year’s design is his, which he adopted from photographs of earlier castles.
“I’ve lived here my whole life, and I always watched it be done. I can’t explain why – I might be a little sick in the head – but it’s just fun,” Douglas said.
He would have liked to build higher – pictures revealed ice castles were once allowed to be built 25 to 30 feet high, he said – but village concerns over insurance no longer allow it.
Douglas has designed a courtyard with steps, and he directed the excavator’s placement of ice blocks, a chain saw nearby in case a block needed to be squared off to fit into place.
“It’s like a big Lego set,” Douglas smiled, recalling one of his favorite activities as a kid.
Swanson said he is looking forward to the festival. He serves on the volunteer fire department, and it will be demonstrating an ice water rescue. He chuckled at the thought of the “polar bear dip,” in which people plunge four to seven feet into the frigid lake water, where ice has been removed, to raise money for the local food pantry.
“Some of the kids jumping in the water are so slim it looks like someone threw a slab of bacon on a hot grill. Right back out of the water they come, just like a rocket. It’s awesome. Others get out and make snow angels,” Swanson said, before adding, “Not me.”
There will also be a kids sledding track, chili cookoff, snowmobile rides, horse-drawn sleigh rides, ice skating on the lake and fireworks.
“It’s a family event that we have rain and shine, whether it’s 70 degrees or 70 degrees below,” said Ken Shearer, president of the Mayville-Chautauqua Chamber of Commerce. “The castle is a great place to take a picture of the family.”


For more information on the festival, go to www.chautauquachamber.org.
email:  msommer@buffnews.com

Area snowmobilers need to know when to hold 'em and know when to fold 'em.
The fourth annual snowmobile poker run, hosted by the Ellery Sno-Cruisers, Kiwanis Club of Lakewood and the Chautauqua Lake Snowmobile Club, is scheduled for Sunday, Feb. 16. Registration will begin at 11 a.m. The entry fee is $30 per player.
Participants can register and start the poker run from any of seven locations involved, including: Bemus Point Golf Course, Lakeview Hotel, Witch Kitch Inn, Pine Junction, Vikings Lake Park, Trillium Lodge or Murdock's Family Restaurant.

Area snowmobilers are pictured at a past gathering in the county.

Submitted photo
Additional stops for poker cards include: Whiskey Hill Saloon, Sandy's Whitehorse Inn, French Creek Tavern, Back Yard Bar & Grill, Tom's Tavern, Steener's Pub, The Hill, The Barr, Cafe Cooler and Stockton Grill.
According to Marcus Maloney, Chautauqua Lake Snowmobile Club event coordinator and co-chair for the poker run, 100 percent of the funds generated after expenses will be donated to the Chautauqua County Water Emergency Team and the Youth Snowmobile Education Fund. The education fund will benefit state-mandated education courses that young riders must complete before hitting the trails.
"We're hoping with the upcoming weather we can get people out riding and supporting local businesses," Maloney said.

"We're hoping with the upcoming weather we can get people out riding and supporting local businesses."
The run will conclude at Vikings Lake Park by 6 p.m., where food will be provided.
The best five-card poker hand will win up to $1,000. Additional prizes will also be awarded.
The "snow date" is Sunday, Feb. 23, if the weather is not cooperative. Call the trail hotline, 800-242-4569, or visit www.chautauquasnow.com for trail conditions.
Sponsors of the event include the Ellery Sno-Cruisers, Jamestown Vikings Scandanavian Fraternal Organization, 106.9 Kiss FM/News Talk 95.3, Kiwanis Club of Lakewood, The Chautauqua Lake Snowmobile Club and the Chautauqua County Water Emergency Team.

© Copyright 2014 The Post-Journal. All rights reserved. This material may not be published, broadcast, rewritten or redistributed.
Save | Post a comment |