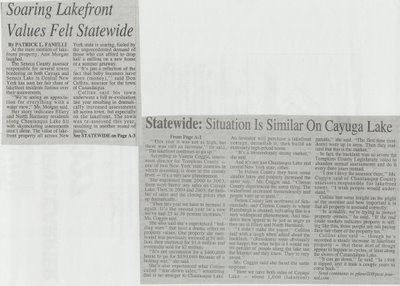 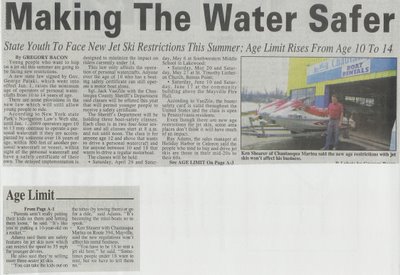 Email ThisBlogThis!Share to TwitterShare to FacebookShare to Pinterest
Western NY Maple Syrup Season " All Over The Board"

Boating season is right around the corner so Findley Lake got a new addition to keep the lake clean and clear for the thousands of tourists who visit the region every year.The weed harvester isn't your average boat. It's a new 10-ton water craft that costs over $90 thousand.And it's a boaters best friend. That's because its sole purpose is to keep the waters of the 310-acre lake weed-free."We have an elevated level, similar to other lakes in the region, of nitrates and phosphates which promote the weed growth and we need to deal with that to keep the lake good for recreational and fishing purposes," explained Ed Mulkearn, Findley Lake Watershed Foundation president.The Findley Lake Watershed Foundation, The Property Owners Association and The Community Foundation have hired someone to harvest the weeds once a year since 1999.But that was inconvenient and costly. So the local organizations contributed money to buy a permanent harvester that can be used whenever it's needed. Mercyhurst College is another contributor since its rowing team uses the lake.A local campground called Paradise Bay also donated money."There was a pretty good support for doing a project like this because everyone realizes how important it is to keep the water quality and everyone was very supportive of the legislature," said Jim Carlisch, Chautauqua County legistlature representative.It's important to remove the weeds, garbage and debris to keep people coming back to one Findley Lake's main tourist attraction.Right now the docks and the boats at Findley Lake are empty, but as the weather gets warmer and hundreds of boaters will cruise the water and thousands of tourists will visit."This is a really important project for our lake and tourism is very important to our community and we're rally excited about this project," said Mulkearn.The Village of Findley Lake hopes this new addition to the water will not only increase the quality of the water, but also the community as more and more tourists are drawn to the area.

ALBANY, NY -- (04/03/2006; 1630)(EIS) -- Commissioner Bernadette Castro of the New York State Office of Parks, Recreation and Historic Preservation today announced several improvement projects planned for the 2006 season at Long Point on Lake Chautauqua State Park. The work impacts the park's bathhouse, trails, interpretive signage and existing Minturn Mansion.
"Long Point on Lake Chautauqua has been a longstanding destination for patrons of all ages to enjoy the park, marina and scenic waterfront recreation that are a hallmark of the warmer months," said Commissioner Castro. "With today's announcement, we are moving forward with additional investment to revitalize the park, undertaking projects that will expand services, increase safety and benefit visitors."
Major improvements will be made to the bathhouse, including a new architectural-style shingle roof, scheduled to be completed during the upcoming season. The continuation of the project will include repairs to the south wing of the top exterior deck, assessment and repair to the stone facing on the lower south wall of the building, repair or replacement of the lower main exterior deck, repair or replacement of building doors, and the completion of upgrades to the showers and restrooms.
Plans also include the removal of the park's Minturn Mansion after no viable compatible reuse for the deteriorating structure had been identified through comprehensive efforts over the last thirty years. The harsh winters and acts of vandalism have contributed to the worsening condition of the building, necessitating its removal for safety considerations. Additional plans for subsequent construction later this year include a gazebo and interpretive kiosk highlighting the valuable contributions of the Minturn family to the history of the park and the community.
"This investment will enhance the beauty of the park, increase safety, and attract more visitors to our gem, Chautauqua Lake," said Senator Catherine Young. "We must beef up our commitment to our state park system and these funds are a good start."
For the past several seasons, dock replacements and upgrades have occurred at the marina. Dock installation will commence as soon as weather conditions permit. Also, the finishing touches will be completed on the improved bicycle trail in the park, as well as the hiking trail around the Point.
Long Point, which juts peninsula-like into Lake Chautauqua, is one of the moraines left long ago by a retreating glacier. The park and marina comprise a day-use area with thickly-wooded areas of beech, maple, spruce, poplar and oak. The park's boat launch is the most modern on Lake Chautauqua, which, at 1,308 feet above sea level, is one of the highest navigable bodies of water in North America.
New York State Office of Parks, Recreation and Historic Preservation oversees 173 state parks and 35 state historic sites. For more information on any of these recreation areas please call (518) 474-0456 or visit the web site at www.nysparks.com